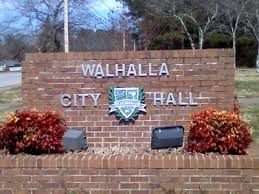 Walhalla’s outside auditor turned up shortcomings during his annual examination of the city’s financial records, but no criminality on the part of anyone. That was a point that the mayor stressed as he and the city council last night received the official audit covering the year 2018-19. And Mayor Danny Edwards’ observation was that what the auditor found lacking are internal controls that the city will be able to address. CPA Jason White of the firm Payne, White, and Schmutz said Walhalla’s action to re-establish the position of clerk-treasurer in July 2019 has helped restore proper order to the city’s finances, but he recommends Walhalla hire an additional City Hall worker in the capacity of an accounts payable clerk. Much of what White addressed with the city leaders centered on what he called a forensic examination of the city’s books. He found much to be lacking, including failure to reconcile bank accounts. The auditor discovered that “several” Walhalla vendors weren’t paid on time, which led to financial penalties to the city. Councilman Josh Roberts said until last night, he was unaware of late fees assessed to city, and he asked, “Should we have been aware?”
February 19, 2020 Dick Mangrum