Dr. Ivy Ellerby and Mrs. Carla Gomez, along with city administrator Mr. Scott Moulder, made a presentation to Seneca’s mayor and council at last night’s meeting on behalf of the city’s Diversity, Equity and Inclusion Task Force…

Their plans are for at least three festivals this year, including a Juneteenth celebration, as well as youth days and celebrating Hispanic heritage in the fall. The group indicated much needs to be done to rid the community of “systemic issues.” 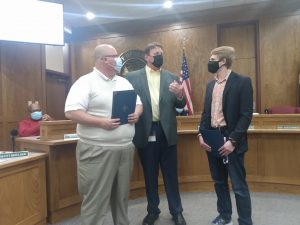 Also during the meeting last night, local residents Jeff Bright and Jonathan Edwards were recognized by Mayor Dan Alexander for contributions made to the city with the use of drone footage during the April Tornado and for promoting Seneca through video and social media.