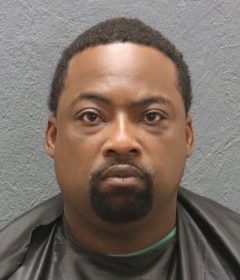 The Oconee County Sheriff’s Office arrested a Bridgeport, CT man yesterday on a charge of Financial Identity Fraud after attempting to purchase a vehicle at an Oconee County auto dealership.

36 year old Bernard Alan Harris of Bishop Avenue was also charged with Giving False Information by the Sheriff’s Office. At this time, Harris remains in custody at the Oconee County Detention Center pending a bond hearing. Harris was booked into the Detention Center around 10:44pm Monday.

Early yesterday evening, a deputy responded to Lake Keowee Chrysler Dodge Jeep Ram on Clemson Boulevard in regards to reports of fraudulent activity. The deputy made contact with an individual on scene, later identified as Harris, who told the deputy that he was attempting to purchase a vehicle, which was a 2020 Dodge Challenger.

Harris had arrived to the dealership in a black 2 door Honda, which departed the scene a few minutes after the deputy had arrived. Harris provided the deputy a Louisiana ID, however, dispatch could not verify the information contained on the ID.

Harris told the deputy that he was the person on the ID and that the name on the ID was his. As the investigation continued, Harris could not verify some of the information on the ID. Eventually, Harris provided the deputies his real name and dispatch was able to locate his information.

According to evidence obtained during the investigation, Harris had attempted to purchase the vehicle with the name contained on the ID. An employee of the dealership told the deputy that Harris had also failed to answer security questions related to the purchase of the vehicle.

The 2020 Dodge Challenger is valued at approximately $71,957.95, according to information obtained by the deputy, with the total sale price, which included financing and the down payment, is listed as approximately $89,895.12.

The arrest warrant was obtained by an investigator with the Criminal Investigations Division. The Oconee County Sheriff’s Office is continuing its investigation.