The Oconee County Sheriff’s Office arrested a Seneca man Wednerday on multiple charges after responding to an alarm call at an address on South Cove Road. 26 year old Anthony Michael Griffin, who has listed addresses of Gail Court and Burkett Road, has been charged with one count each of First Degree Burglary, Petit Larceny and Possession of Tools Capable of Being Used in a Crime.

After arriving on scene, deputies observed shattered glass inside of the residence as well as a bicycle at the back of the residence along with a backpack at the edge of the wood line. Deputies also discovered a male, identified as Griffin, not far from the location of the backpack and the house.

As the investigation progressed, deputies discovered tools inside of the backpack as well as some sporting goods equipment and some ammunition. Deputies also discovered some damage to a latch of a storage building on the property that could be used to gain access to another storage building.

Based upon the total evidence gathered during the investigation, deputies obtained the arrest warrants against Griffin. According to the arrest warrant on the burglary charge, Griffin has two of more prior convictions for burglary.

Griffin was released from the Oconee County Detention Center yesterday on his own recognizance. Griffin was given a combined $30,000 surety bond. 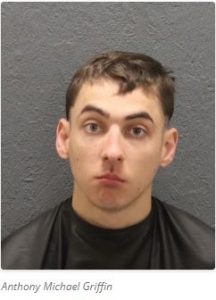