The Oconee County Sheriff’s Office arrested a Westminster man on a Fugitive from Justice charge after a traffic stop this week. 38 year old William Charles Cox, Jr. of Country Place Lane was booked into the Oconee County Detention Center around 4:04am Wednesday morning. Cox, Jr. has also been charged with Driving under Suspension, Operating an Unregistered Vehicle and Operating an Uninsured Vehicle. A check with dispatch revealed that Cox, Jr. had a warrant out of the state of Maryland for First Degree Burglary/Probation Violation. At this time, Cox, Jr. remains in custody at the Oconee County Detention Center. Cox, Jr. was denied bond on the Fugitive from Justice warrant and received a combined $905 personal recognizance bond on the remaining charges. 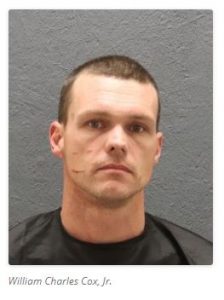