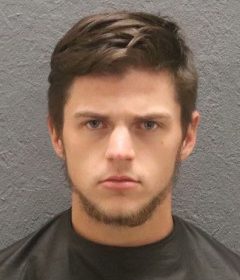 The Oconee County Sheriff’s Office is announcing today the arrest of a Westminster teenager on multiple charges in relation to two separate investigations.

19 year old John Austin Dakota Pruitt of Dr. John’s Road was booked into the Oconee County Detention Center around 2:05am this morning. Pruitt has been charged in an investigation into an April 5th, 2021 incident with Attempted Murder, Criminal Domestic Violence – High and Aggravated and Assault and Battery – High and Aggravated. In the second and separate investigation into a February 20th, 2021 incident, Pruitt was charged with Domestic Violence – 1st Degree. At this time, Pruitt remains in custody at the Detention Center on a combined $500,000 surety bond.

In regards to the February 20th incident, a deputy from the Uniform Patrol Division responded to an address on Kilpatrick Drive near Seneca and spoke with the victim, a woman, in regards to an assault. During that incident, Pruitt struck the victim on the head and face with brass knuckles, according to an arrest warrant that was obtained. The victim’s phone was broken by Pruitt and a six month old child, who Pruitt and the victim have in common, was present during the assault.

In regards to the April 5th investigation, a deputy from the Uniform Patrol Division responded to an address near Westminster to meet with two victims in regards to reports of a domestic incident that had occurred at Highway 59 at Highway 24 near the Tokeena Crossroads. According to the victim’s, the ex-girlfriend of Pruitt was driving a vehicle that Pruitt had attempted to run off the road with his vehicle. The ex-girlfriend in this investigation was the same victim as in the Sheriff’s Office investigation on February 20th.

After the victim pulled her vehicle over, a male subject got out of her vehicle and exchanged words with Pruitt. According to the victim’s, Pruitt fired a shot in the direction of the male subject, upon which the male victim produced a firearm and fired a shot at Pruitt. An 8 month old child that Pruitt and the female victim have in common was in the backseat at the time of the incident.

According to arrest warrants obtained on Tuesday, Pruitt was under a bond restriction that prohibited any contact with the victim in relation to Pruitt being charged on September 3rd of last year with Domestic Violence – 2nd Degree in an incident involving the same female victim. In that incident, Pruitt was charged with assaulting the woman while she was holding their infant child. Pruitt was arrested on that charge, along with multiple other charges, on September 3rd, 2020 and was released from the Oconee County Detention Center the next day after posting bond.

He remains in custody at this time with a bond set in the amount of a half million dollars.

Details surrounding his arrest are anticipated from Sheriff’s officials soon.