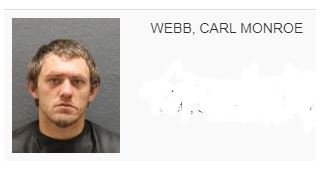 Two men were booked into jail on drug charges this past Friday, March 6.

In their first major drug sweep of the year, the Oconee County Sheriff’s Office has added another name to the list of individuals arrested, the list itself consisting of seventeen people in particular who were wanted on drug distribution charges. Suspect number twelve in the sweep has been identified by authorities as 28 year-old Carl Monroe Webb of Westminster. He is being held in the Oconee County Detention Center, pending $10,000 bond, on one count of distributing meth.

Also on Friday, Clifton Eugene Payne, age 64, was arrested by Deputies and charged with possession of meth. Payne, according to jail records, was released from custody Monday on $10,000 bond.