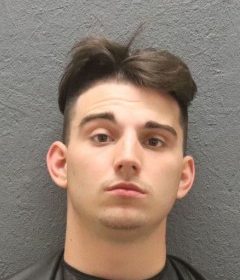 18 year old Herbert Alan Price III of Buckskin Road was also charged with Possession of a Weapon during Commission of a Violent Crime, Discharging a Firearm into a Dwelling and Littering.

A deputy from the Uniform Patrol Division responded to an address on Andrew Pickens Drive near Seneca in regards to reports of a drive-by shooting. A second Uniform Patrol Deputy located the suspect vehicle and performed a traffic stop on Seneca River Road near Ohenry’s Lane near Martin Creek based upon the vehicle description information that was provided.

Deputies began an investigation by speaking to the victim and also began the process of gathering evidence from the crime scene. The deputy who initiated the traffic stop on the suspect vehicle made contact with the driver and the passenger, identified as Price III.

Based upon evidence that was gathered as a result of the investigation, it was determined that Price III had fired shots from a handgun at the residence on Andrew Pickens Drive from the passenger seat of the vehicle he was in. Deputies recovered the firearm that was used in the shooting discarded on the side of the road on Seneca River Road.

The investigation was turned over to the Criminal Investigations Division. Price III was placed under arrest and transported to the Oconee County Detention Center. The vehicle was towed away from the scene of the traffic stop. The driver of the vehicle was issued a citation for not having a South Carolina driver’s license and was released from the scene.

The Oconee County Sheriff’s Office is continuing its investigation. At this time, Price III remains in custody at the Oconee County Detention Center as bond was denied on all four charges. Price III will appear before a Circuit Court Judge at a later time regarding bond.