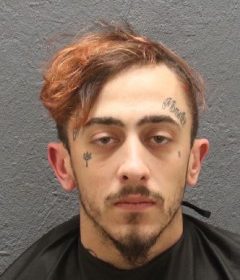 The Oconee County Sheriff’s Office arrested a Seneca man on a drug trafficking and weapons charge Wednesday after investigators responded to the his home address in regards to a separate investigation.

25 year old Clifford Jacob Ricketts of Deer Ridge was booked into the Oconee County Detention Center on one count each of Trafficking in Methamphetamine and Possession of a Weapon during Commission of a Violent Crime. Ricketts was also arrested on an outstanding warrant on a charge of Littering in relation to a separate investigation.

Investigators from the Criminal Investigations Division responded to the Deer Ridge address in regards to a follow-up investigation involving a wanted subject. When investigators arrived on scene, Ricketts was observed on the property and placed under arrest on the outstanding warrant. Investigators located a firearm on Ricketts person.

At this time, Ricketts remains in custody at the Oconee County Detention Center with a bond amount set at more than $100,000.