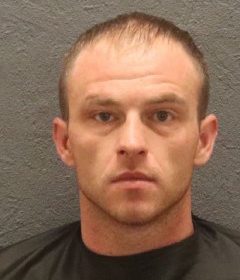 The Oconee County Sheriff’s Office filed a murder charge yesterday against a Walhalla man as the result of an investigation into a February 11th house fire.

28 year old Christopher Edward Burrell, who has a listed address on his arrest warrant of Wolfers Hollow Road, was served his arrest warrant at the Oconee County Detention Center Wednesday. Burrell was arrested by the Sheriff’s Office on March 17th on charges related to four separate Sheriff’s Office investigations which are unrelated to the investigation into the fatal house fire, plus, Burrell was also served with three Magistrate Bench Warrants.

The Oconee County Sheriff’s Office began the investigation on February 11th as dispatchers from the E-911/Communications Center received a call around 12:38pm that day from a third party regarding a structure fire at 540 Adams Sullivan Road, which is near Rock Crusher Road and Coffee Road near Walhalla.

Deputies from the Uniform Patrol Division responded and discovered the residence to be fully engulfed. Fire Department crews, along with first responders and paramedics, arrived on the scene. Adams Sullivan Road was also shut down as well due to personnel and equipment in the roadway.

A body was discovered inside of the residence and investigators from the Criminal Investigations Division were notified. The Coroner’s Office was also notified and responded to the scene. Fire investigators from the South Carolina Law Enforcement Division were also notified as they respond whenever a fatality occurs in regards to a structure fire or when a fire appears to be suspicious in nature.

As the investigation continued and evidence was gathered in the case, it was determined that Burrell had struck the homeowner and the deceased, 65 year old Marlan Frank Sparks, with an aluminum baseball bat, which incapacitated him. Burrell then set the residence on fire, according to an arrest warrant obtained by an investigator.

In one of the separate investigations conducted by the Sheriff’s Office that involved Burrell from earlier this year, Burrell was charged by the Sheriff’s Office with Assault and Battery – 3rd Degree, Breaking into a Motor Vehicle and Malicious Injury to Personal Property. Burrell was accused by Marlan Frank Sparks of assaulting him on January 18th while also breaking into Mr. Sparks Ford Ranger pickup on January 20th and damaging the ignition switch in an attempt to hotwire the truck.