A twine fence has been placed around the Confederate Memorial in Walhalla along with signage that tells people to stay off the statue for their own safety. We spoke this morning with Police Chief Sean Brinson, who addressed the curfew implemented last night, as well as the multiple arrests that took place. He said his main concern, however, is protecting the rights and safety of the citizens his department serves…

Walhalla’s Mayor, Danny Edwards, said that, in regards to extending the emergency curfew enacted last night for up to a week, the City of Walhalla will do what is necessary to keep the peace. The memorial sits on a right of way owned by the South Carolina Department of Transportation. State Law prohibits moving an historical monument without votes by two-thirds of both legislative chambers. Mayor Edwards said that communication with his citizens is key. He said that a lot of the protesters are not residents of Walhalla, but there are some who live in the city. He hopes to organize a meeting in the coming days with area leaders to find a peaceful solution. 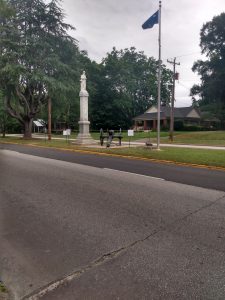